Please send an email to contact.lankaninvestor@gmail.com if you face any technical difficulties when posting
Search
Latest topics
»  Rajgama Heroes !

Yesterday at 7:26 am by The Invisible

» Thread for News on CSE and SL Economy

Yesterday at 7:17 am by The Invisible

Yesterday at 7:14 am by The Invisible

» In the Meantime, Within Our Shores !

» How to get Access to: 104 Technical trading experiments by HUNTER

» Sri Lanka to monetize tens of billions of contractor bills

If we want reasons to worry we have enough. But if you are a careful investor there are enough good reasons to invest.


Congressional Record: Proceedings and Debates of the ... ...


United States. Congress - 1965 - ‎Law
Everywhere in our Government we see a burgeoning of retired and active military ... Americans who trace their American ancestry to colonial days carry the rich ... are being, pushed from civilian jobs by military men—most of them retired brass.

Anyone who wants to know former military men becoming US Presidents...

කිත්සිරි ද සිල්වා wrote:What you see now is a Barrel Roll only and the real Nose Dive will begin only after the General Elections.

How about changing the topic to Gota's thitha(.) insted of era 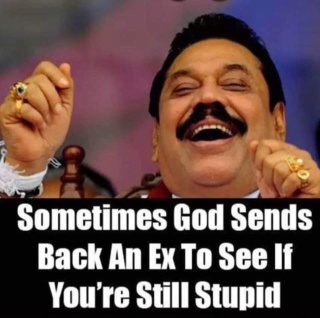 Some people still didn't learn the lesson ,rather than worshiping politicians and doing slavery to them and wasting time here for political crap how about focus on shares.

Presidents are the symbol of power.
Practically, the power is in military and money.

So the three should go hand in hand.


Voters have the chance to vote for their preferred candidate.
But candidates are chosen by those who have Money and power.

The FD interest rate has gone down from 10% to 8% and many were hoping part of that investment will come here.
But hitherto no such sign.
The first two days brilliant turnovers were reported and look now.
Companies are reporting reasonably good earnings but the market is not responding.
Why?
Because despite some have a slave's mind, the market knows that this regime is not capable of doing anything good except for repeating their last time performances 100 times higher this time. 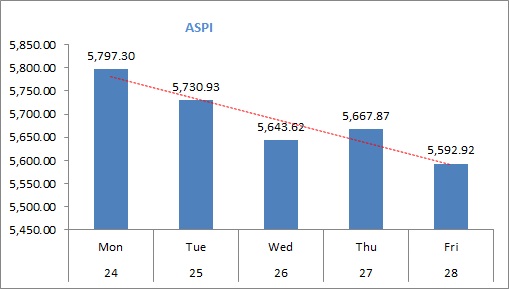 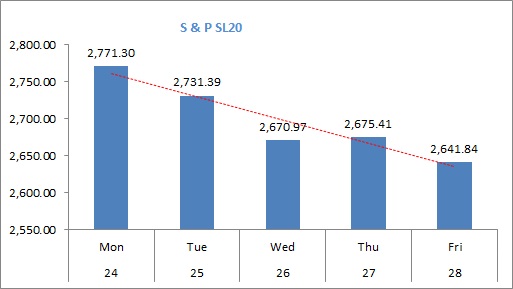 Talking is easy but walking those talks are not that easy.
Seen an interesting comment on one of the social media sites recently, aptly depicting the present situation.
" පුටින් වගේ කියලා ගෙනාපු එකා හිටන්ටත් හපන් වැඩ කරන්නේ! "
_________________
I am the wisest man alive, for I know one thing, and that is that I know nothing.
Socrates 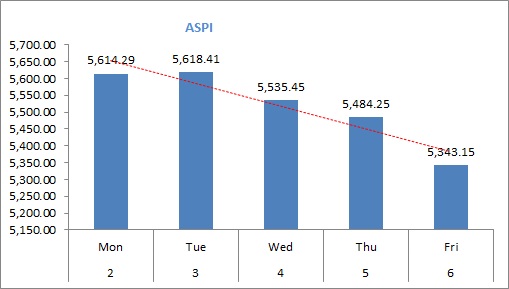 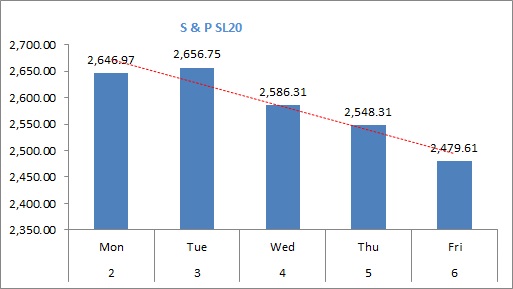 ASPI recorded the second biggest drop in SL history as it dropped by 221.24 points today. The highest drop of 300.59 points was recorded in 2010.


Spread out of Corona Virus can be assigned as a reason.

WHO officially declared COVID-19 a pandemic

Its difficult to compare between one as Walter Disney used to say. So I took Dow Jones Industrial Average and ASPI to find a possible impact of Covid 19.. Red line is ASPI.

Technical traders must be finding it very difficult to perform in CSE.

When I posted the below comparative graph ( which include USA too) ,

before market reopened on May 11th , I wanted to highlight how CSE
has under performed against most of the  world /countries ( USA included)
which has so much higher COVID19 impact !

The recent CSE recovery has done some justice as somewhat expected .

On the Thread topic


1) We need to commend the handling and precautions taken by government
over COVID19.  They did an overall good job to contain COVID19.


2) But Balancing Health, Economy , Education, and Well fare of Public
is the Job of the government! That why they are appointed


I) The  continuous very strict curfews,

a) shuttered most businesses ,

c)or  finding a way for day laborers to survive

have made a massive impact on the economy / hardship on non affluent people.

II) CSE should have never been shut down for 6 weeks.

That certainly did destroy Foreign investor confidence exacerbating
foreign selling further when CSE finally did open. If CSE had a way to
to be opened atleast since April, by now the foreign selling would be
mostly over.

What guarantee will be  there for foreigners , a CSE shut down  again with
not happen without notice.  I am sure foreigner are worried about such too.
( what the point of having market if they don't have liquidity to withdraw
when they want)

Except CSE and Bangladesh , other countries kept their markets open.


I hope this pandemic will provide an educational lesson for   government
to be more prepared and organized when an unexpected pandemic comes
again in the  future ( hope not but hey life is life) .

Taiwan handled the Corona so well as they had experience from SARS.

New Zealand did a very good job too.

Foreigners have been net sellers well ahead of Corona Spread. The thread shows that negativity from the very beginning.

Issue is did CSE closure for 6 weeks affect Investor confidence?
I definitely think it did.

Here is an easy to understand example :

Let say a USA fund wanted to sell their shares on March 22th.
Then they wanted to take the money and reinvest in USA stocks.

What happened is CSE was shut and they couldn't withdraw.
If they did and reinvested say in USA, they could have gained 20-30%
in certain shares.

That a big opportunity miss .
What gurantee does a foreign fund have that this won't happen again at CSE.

When the market opened, I am sure some  foreign fund were more comfortable
to exit Sri Lanka soon as possible to take that money and reinvest somewhere else without taking this risk again.

Out credit rating is also very bad.
Also with Rs depreciations  matters worse.
_________________
Never listen to anyone including myself without your own study. Only few truly genuine people exist in this world.
Please read : https://forum.lankaninvestor.com/t1548-important-warning-and-message
---------

Over the weekend it came to light that Sri Lanka’s Light Rail Transit (LRT) project was being placed on the back burner after the Japanese government - who funded the project - halted funding, having raised concerns regarding Sri Lanka’s ability to repay the loan.

The Government of Japan had been alarmed by a combination of factors, specifically, Sri Lanka’s request for a debt moratorium from Japan, combined with Sri Lanka pushing ahead with the construction of new power plants. This, along with the President’s assertion earlier in the year that the project would not be able to continue for the next five years, had given Japan enough pause to halt financing altogether.

For the Japanese government, much of their consternation arises from perceived policy inconsistencies and a lack of clarity on the part of the Sri Lankan Government with regard to their ever-growing national debt.

This, while not a new nor novel concern, is nevertheless a red-hot indicator as to the direction in which the Sri Lankan economy is heading - lest it correct course expeditiously. For many years now, Sri Lanka’s investment framework from a policy standpoint has been extremely flawed. Successive Governments have been involved in a cycle of taking up ill-thought out proposals that have a very long return on investment, rushing through tender procedures, and axing the previous regime’s plans once coming in to power, to name but a few in a long list of grievances.

Sri Lanka’s steady drop in growth numbers and repeated balance of payments crisis over the years only serves to solidify the view that the country’s debt dynamics are simply not working. And to paraphrase Einstein, the clearest sign of insanity is doing the same thing repeatedly expecting different results.

For Sri Lanka, the plan to leverage debt in the search for economic growth has just about run its course. The country’s debt-to-GDP ratio has rocketed from roughly 55% in 2006 to over 90% in 2020.

It’s clear that despite such high spending, there just isn’t enough economic growth to show for it. And what’s even clearer is that, as it stands, there is no longer enough room for manoeuvring. This year alone debt repayments total Rs. 4.8 billion, of which Rs 3.2 billion is still outstanding.

For the Sri Lankan Government and President Rajapaksa, this should serve as a wakeup call, but also an opportunity to avoid the same pitfalls of previous regimes - where long-term objectives are waylaid by irredeemable mistakes in the short-run. The first step of subverting this trend is to, rather than push through projects haphazardly sans parliamentary oversight, wait till Parliament is in session and instead use this critical time period at the start of their term to clearly identify, debate and demarcate a core set of projects. Secondly, match the said projects to President Rajapaksa’s election manifesto. And finally, ensure that whatever projects are approved and financed, they fit in with Sri Lanka’s long-term economic reforms.

This means that, while ensuring cheap electricity generation is essential to development, it should not come at the expense of long-term sustainability objectives. Nor can the country continue to indiscriminately increase its national debt on economic projects that lack a clear plan of economic return. Sri Lanka, quite simply, cannot afford any more slip-ups.

I have said this earlier somewhere in this forum. Japan is our friend, period. Dont confuse this with anything else, they are not like USA, India or China. A grateful friend for the help JRJ did in canvassing support for them by quoting Lord Buddha in the UN. Make no mistake, they will try everything possible to support us, if we know how to work with them.

But if some have other interests, then Japan is not the country to work with.

puliyanam wrote:I have said this earlier somewhere in this forum. Japan is our friend, period. Dont confuse this with anything else, they are not like USA, India or China. A grateful friend for the help JRJ did in canvassing support for them by quoting Lord Buddha in the UN. Make no mistake, they will try everything possible to support us, if we know how to work with them.