Message reputation : 100% (1 vote)
Thanks Nihal.
(I hope they have looked well into fire control and fighting capacity of the country as well before signing MoU).
_________________
I am the wisest man alive, for I know one thing, and that is that I know nothing.
Socrates

Can be like tallest X Mas tree.....subcontract to Arjuna.

Lot of suspicion behind this project.

Chances are that this is a scam 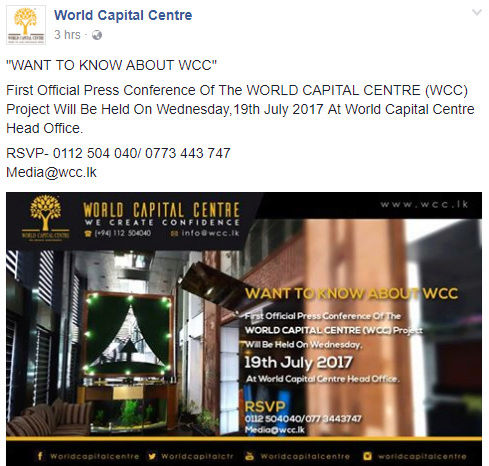 The first official press conference of the proposed World Capital Centre (WCC), billed to be Asia's tallest building - purportedly a $ 2 billion investment - ended up raising more questions than answers, with the company being unable to satisfactorily clear up doubts surrounding the project.

Since the project's official announcement earlier this month (the company itself was incorporated in March 2015), the WCC has been shrouded in mystery and confusion, with questions being asked about the origins of its parent company, the Al Aman Group, the sources of investment for this mega project, and the company’s agreement with the Board of Investment (BOI) of Sri Lanka.

A press release issued by WCC claims that it is a "globally renowned company with an international network reckoned with its operations in the UK, Switzerland, the UAE, Malaysia and all over the world and is formed to perform in the international business arena in the areas of investment, projects and trading."

When Daily FT and other media organisations present at the event demanded proof from Al Aman WCC Deputy Chairman Dr. Senaka De Silva and Senior Deputy Chairman Vivek Anandarajah of this claim of international repute, neither was able to provide adequate information on its operations in the UK and elsewhere. Nor were any of the other WCC representatives on the panel able to provide concrete examples of any completed projects internationally.

As things stand now, WCC has entered into a conditional agreement with the BOI and is required to show $ 200 million and land details by 31 December this year, failing which the BOI may terminate the project.

Of the $ 200 million, only $ 2 million has so far been brought in, but WCC officials refused to reveal where the funds came from, citing reasons of confidentiality. Land has yet to be allocated for the construction of the building, with the company currently eyeing locations near the Welikada Prison complex and 14 acres of land near the Dematagoda Bridge.

According to Anandarajah, WCC may go with multiple funders - all of whom will be from aboard - and are currently in the process of vetting potential investors.

"We can't bring the money to Sri Lanka. The bank has closed our account. They asked us to show the agreement with the BOI. We spent two years to sign the agreement. That's what the BOI did to us. The bank has sent the letter to us," said Dr. De Silva.

If all goes according to plan, the twin-tower building is scheduled to be completed by 2023, with some 1,200 residential units, 3,000 retail outlets and 2,000 hotel rooms functioning as a seven star hotel. According to Anandarajah, roughly 75% of the staff will be foreigners, as "very few Sri Lankans have the high rise experience."

"This company is globally known; that is how the global investors have agreed to invest," said Anandarajah when journalists once again asked for clarification on the international repute as claimed in the press release and the company's website (the Al Aman website, at the time of writing, was under construction).

No completed projects or any other property exist even in the neighbouring Maldives, apart from a letter signed on 8 December 2015, purportedly by the then Maldives Finance Minister, as previously reported in the media, granting the Al Aman Group permission to bring money into and out of the Maldives.

"We tried to do business in Maldives. We couldn't unfortunately because of the political situation there," said Dr. De Silva.

Upon being pressed further, the Deputy Chairmen implied that the WCC tower was intended to be a hub that would ultimately be connected to the company's international projects.

"This is going to be the hub. After we start this we're going to connect the whole world to this, okay?" said Dr. De Silva, insisting that they had not been lying.

Once land has been identified, investors have agreed to fund the project, and WCC will acquire its $ 200 million by 31 December, as agreed with the BOI, said Anandarajah.

When asked to clear up doubts about Al Aman WCC's ownership, Anandarajah said it was a "100% owned company, but there will be shares when funders come." Once the project has reached completion, he said, it'll become a shareholding company with the funders. Al Aman WCC's stake will be decided once the project is over, he added.

"At the time, we will be giving the shares to the funders," he said.

Asked about other subsidiaries owned by the Al Aman Group, WCC lawyer S.P. Sriskantha said that he had not been briefed on those particulars, stating that the purpose of yesterday's media conference was to promote this specific project.

Responding to a journalist who again asked what the international holding company was, Sriskantha repeated: "I have not been briefed on that," adding that he is the lawyer for the local company.

"Legally speaking, there is a company incorporated in Sri Lanka. That's the company that's going to promote this project," he further said, adding that the funders are behind that.

Anandarajah said there was a misunderstanding about the ownership of the company.

"This is a local company registered under local regulations, but it's a BOI-registered company. We have the permission to bring funds through the normal channels and regulations and guidelines by the Central Bank and the Government. That is how shares will be sold," he said.

"It's our obligation to bring the $ 200 million and to identify the land and go ahead with the project," he said.

The potential investors, he said, are convinced that the project is going ahead, adding, "It's our prerogative to select the right funder that will be good for the project."

He then went on to say that funding comes only after finalisation of the project. Asked if this meant there were no confirmed funds, Anandarajah said they had received funds, but declined to disclose the sources.

According to WCC Lawyer Sriskantha, however, investments may not necessarily be from abroad, pointing out that the BOI agreement says the total investment of $ 2.4 billion can be in Sri Lankan rupees too.

"The enterprise shall make an investment of $ 2.4 billion or its equivalent in Sri Lankan rupees," he said, quoting the agreement.

Anandarajah, however, reiterated that it will be a 100% foreign direct investment (FDI) and that any money will come in foreign currency.

The BOI agreement was signed on 30 June, and a deadline has been given till 31 December to find the required $ 200 million fund in order for the BOI to not terminate the project.

"We can discuss on 1 January whether the fund has come or not," said Anandarajah.

He also refuted speculation that the whole operation could be a money laundering exercise, stressing that the money comes through the Central Bank and followed regulations.

The architectural work of the building has been contracted to RSP Architects Planners and Engineers (PTE) Ltd, a Dubai-based company. Anandarajah denied media reports to the effect that RSP was unaware of the deal, insisting that the architecture firm had already started work. While WCC has taken it upon itself to announce the partnership, the RSP website makes no mention of it.

Al Aman WCC, according to Anandrajaha, will go for a 100% share funding model, instead of debt funding, acuity funding or sales funding.

"We're going on a total share funding, that's why the 2.4 billion funding will come even if we don't sell one unit," he said.

"We're not depending on sales," he said.

Dr. De Silva also denied any connection between the project and the recent resignation of BOI Chairman Upul Jayasuriya.

If completed, the 117-floor, 625-metre building will be tallest in the South Asian region, and either the 5th or 9th tallest building in the world, depending on which press release one looks at.