Reuters: A Chinese-backed real estate project near Sri Lanka’s main port is expected to attract $13 billion worth of investment from next year, the developer said on Friday.

Liang Thow Ming, Chief Sales and Marketing Officer of CHEC Port City Colombo Ltd., the local company that handles the project for CCCC, said a third of the 269-hectare (665-acre) site had been reclaimed from the sea.

“We are hoping to deliver the first site for construction by the end of 2018,” Liang told Reuters in an interview in Colombo.

The reclamation was expected to be completed by the end 2019 and the company anticipated $13 billion worth of investment in the form of housing, marinas, health facilities, schools and other developments over the next 30 years, he said.

President Maithripala Sirisena’s administration restarted Colombo’s new waterfront development – thebiggest Foreign Direct Investment in the country – in2016 after suspending the project because of concerns about overpricing and financial terms.

The new land is being built from the sea in the commercial heart of the capital adjacent to the main port and the historic Galle Face Green.

“We are positioning the Port City as a hub to the whole of South Asia ... This is a huge market and a region growing very fast,” Liang said.

The Government has proposed to ease rules for investors in the project, although no bills have been presented to Parliament.

Liang said 50% of the land would be allocated for housing, 30% for commercial offices and the rest for other activities.

India has objected to some aspects of the development near Colombo Port, a major trade route for the South Asian giant.

Sirisena’s administration rejected a proposal to give 20 hectares of freehold land to CCCC after India raised concerns. Instead, the Chinese firm was given land only on a 99-year lease. 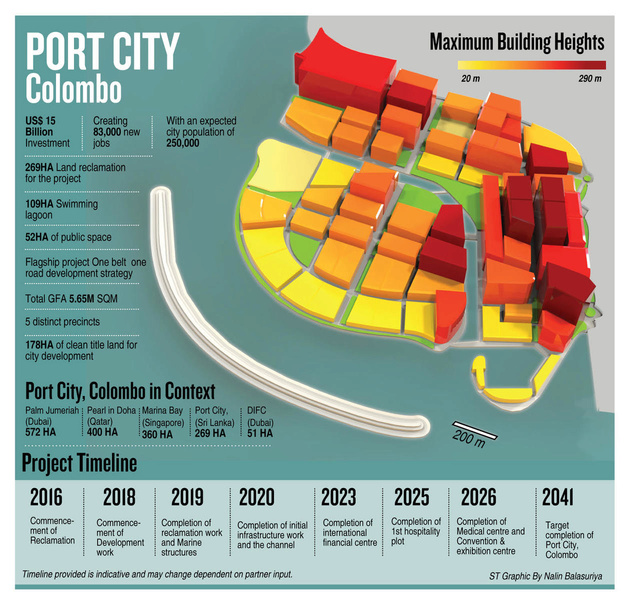 It is coming and for sure !