This is the kind of industries we needed badly, which can lead to true manufacturing led economic development rather than debt fuelled infrastructure projects.

Those who swallowed the tons of lies created by YPs during election era, now is the time to swallow them... 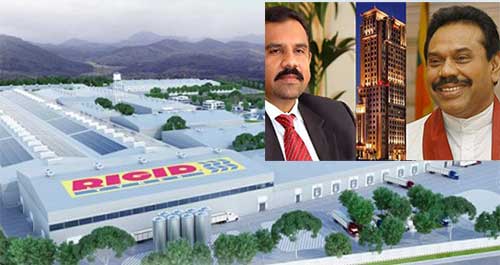 YK - Admin informed us not to put links from political websites such as Lanka Cnews, Lanka enews, etc.

Let us maintain that stance however tempting it is to do so.

There are non political links to your story. Pls put those

Message reputation : 100% (1 vote)
It seems YK is solely rely on lankacnews as his news source.

One good thing with our forum is we can go back and see what we wrote in past...

How many wrote against Nandana Loku Withana during past just because they were hood winked by petty minded political leaders?

Now it is the same who appreciate Nandana...

Both quotes of above high light the same on Nandana's investment in SL.. However one quote shows the past behaviour while the other has missed that...

YK - You may discuss Nandana in a different thread and in a political thread. You may put the past links if you think fit and others may respond where needed. Writing here in this thread in this detail is changing the topic.

If we don't act responsibly the 123 kids will goto town with the situation !

yellow knife wrote:One good thing with our forum is we can go back and see what we wrote in past...

How many wrote against Nandana Loku Withana during past just because they were hood winked by petty minded political leaders?

Now it is the same who appreciate Nandana...

Both quotes of above high light the same on Nandana's investment in SL.. However one quote shows the past behaviour while the other has missed that...

Message reputation : 100% (1 vote)
Great to see this I was thinking with the high costs and lazy labour force not possible for something of this magnitude in manufacturing in SL.

On a separate note seems like Volkswagen has not come to SL.

This is after much talk and even FT.lk reporting its Vw on Jan 4th Seems like journalists dont know what they talk about of or is it the politicians ?

On both of these investments you will see blatant political mistakes by this govt. There is no actual FDI coming in only local affiliated companies doing some investments.

Another Money Laundering Facility only finally !

One reason why I appreciate you Kith is you remained in the same thinking whether Nandana invest during MR era or YP era...


Anyway Kith can you remember the thread where we argued about Dubai Hotel and Nandana.... Love to re visit that thread...

Then as SL ppl get more job opportunities, YP boys will forgive Mara for his scandals know?
Besides, he was thoughtful of the future know? He knew that a disaster would hit coming years so hid money for later use.. How powerful thinkin'

HAL9000 wrote:It seems YK is solely rely on lankacnews as his news source.

Well this time its Sunday Times...

By Namini Wijedasa
An Italian company that was reported to be investing in a US$ 75 million (Rs 11 billion) tyre production plant in Sri Lanka under the Board of Investment (BOI) has distanced itself from the project. Marangoni is only involved indirectly in the possible US$75 million investment in Sri Lanka, the company says in a statement on its official website. What has been discussed is only a “hypothetical transfer of technology to a Sri Lanka-based investor” as part of a possible joint venture with a Sri Lanka-based investor. The investor is Ceylon Steel Corporation, owned by controversial UAE-based Sri Lankan businessman Nandana Lokuvithana. Prime Minister Ranil Wickremesinghe on Thursday laid the foundation stone to build what was painted as “Sri Lanka’s largest integrated tyre manufacturing plant” at Wagawatte in Horana.
It was reported that Rigid Tyre Corporation (Pvt) Ltd (Marangoni of Italy) was the investor for the project which would create more than 3,000 direct and indirect jobs. A statement from Rigid Tyre Corporation said the plant would manufacture a whole gamut of products from radials for light and heavy vehicles to off-the-road tyres. However, there is still no joint venture formed with Marangoni to set up the factory, authoritative sources told the Sunday Times. Neither has the BOI agreement for the project been signed.
“Contrary to what was reported in several recent articles, the possible 75 million dollar investment in Sri Lanka only involves Marangoni indirectly,” the Italian firm said. “The news, in fact, does not refer to the industrial tyre segment but rather to a hypothetical transfer of technology to a Sri Lanka-based investor–Ceylon Steel Corporation–discussed as part of a possible joint venture in the passenger car tyre sector.”
Ceylon Steel Corporation (CSC) is owned by Mr Lokuvithana. Marangoni has been operating its own industrial tyre manufacturing facilities in Sri Lanka since 2008. But six years later, the company suspended passenger car tyre production in Europe and has now begun negotiations to sell its production plants to CSC.
The Marangoni plant in Sri Lanka was opened when production capacity at its original Rovereto site in Italy was no longer sufficient. The location of the plant “has allowed the company to exploit the possibility to enter and supply its products to new international markets”, the statement said.
Cabinet approved the allocation of a massive 100 acres of land in Wagawatta for the project on a proposal by Development Strategies and International Trade Minister Malik Samarawickrama. With Marangoni’s clarification this week, it becomes unclear where the US$ 75 million pledged to the venture will be sourced from. The BOI is to grant a decade-long tax holiday to the investor.