Apr 17, 2014 (LBO) - Sri Lanka's rubber growers are being hit by falling world prices with production volumes also dropping due to a drought within the country, an industry association said.

Deputy Chairman Planters’ Association of Ceylon (PA) and CRTA Vice Chairman S. S. Poholiyadde said in a statement that rubber prices have halved over the past three years.
Colombo Rubber Traders’ Association (CRTA) Chairman, M S Rahim said that latex crepe reached record highs of 600 rupees a kilo in 2011 but ended 2012 at 385 rupees and remained around 400 rupees in 2013.

From January 2014 rubber prices have fallen again with latex crepe down around 305 rupees, he said.

In April the average price for latex crepe at Colombo auction was 300 to 230 and ribbed smoked sheets were unquoted, the statement said.

Rubber prices are firmly linked with China stock piles, (and to a lesser extent on petroleum) which I believe are decreasing. Might recover towards end of the year. 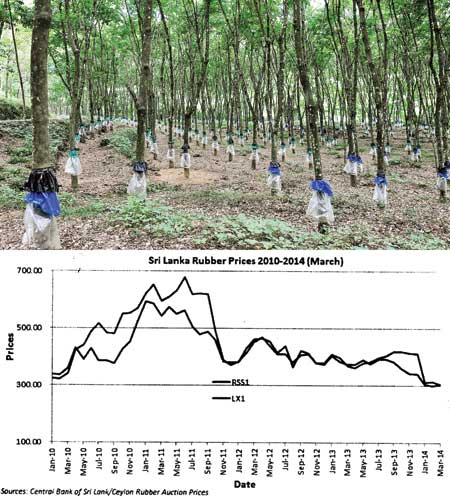 Despite rubber being one of our key productive assets there is growing concern of the continual price declines experienced since 2012. Although enjoying a boom for nearly a decade, Sri Lanka’s rubber prices have seen considerable declines in recent times.

Colombo Rubber Traders’ Association (CRTA) Chairman, M.S. Rahim said "The price drop in the world reflected on us too. With lower prices in the current period costs of production will increase and we’ll be faced with losses. Smallholders too have to bear the price drop and drop in production due to bad weather conditions that prevailed in 2013."

Commenting on the prices declines he added "In 2010 prices (Thick latex crepe) reached a high of Rs. 593. In 2011 prices reached record highs of over Rs.600/- for a period of seven months. After a slow start in 2012 prices recovered thereafter but began to drop slowly to end the year at Rs.385/- per kilo."

"In 2013 the market recovered quickly at the beginning of the year to reach over Rs.400/- in the first quarter after which there was slight drop in the second half but overall prices were stable at Rs.400/- till the end of the year. From January 2014 there has been a sudden sharp drop in latex crepe prices to a current Rs.305/-," Rahim stated.

The recent Weekly (1st April 2014) Rubber Auction recorded average prices for Latex Crepe between Rs.300-230 and RSS remained unquoted. Deputy Chairman Planters’ Association of Ceylon (PA) and CRTA Vice Chairman S. S. Poholiyadde said "Over the last three years, the rubber price has fallen by over 50%. It is now around Rs.300, where it was Rs.600 in 2011."

Explaining the reasons for this declines Poholiyadde said "This is mainly due to the global economic situation. Especially in European countries, there has been an economic slowdown. This has had an impact on the prices globally."

Adding to the gloom in rubber’s bear market is the supply glut as stockpiles in China swell. "There has been stockpiling in China. Most of the largest manufacturing facilities are in India and China, and this too has pushed their market up compared to us," Poholiyadde noted.

Commenting on the easing demand from the world’s largest consumer of the commodity, Damitha Perera, Director Rubber, Forbes and Walkers Commodity Brokers stated "The price is stagnant now. The reason is stockpiles in China with 300,000 tonnes. They are not aggressive in the market, and it’s not good for us."

"Crepe and RSS is stagnant as this is the lean period and off season. A boom in prices is not expected for a few months." Perera added.

"China the largest consumer in the past four years found their economy slowing down and, due the fact that they were over stocked, prices had to slow down. Besides countries such as Vietnam and all other producing countries had reached high levels of Production" Rahim noted.

The Plantation Workers’ Collective Agreement of April 2013 has exacerbated this. "There has been an increase in the cost of production by about Rs.20-25 as a result of the wage increase said Poholiyadde. "Wages will obviously further increase. We need to adopt strategies to lower cost of production," said Professor Asoka Nugawela, Professor of Plantation Management at Wayamba University.

Smallholders, who receive insufficient revenue because of low yields and low prices, could be forced to convert land to other crops. The CRTA Report 2012/2013 states "It is critical that these smallholder growers obtain the best possible prices for their rubber, in line with prices realized at the auction, to enable them to remain viable."

Declining prices also affect the larger Regional Plantation Companies (RPCs). Not only are smallholders feeling the pinch, but the large RPCs are affected too. According to Professor Nugawela, "A drop in the farm gate price of more than Rs.100/kg will have a significant negative bearing on producers in both sectors."

For competitiveness and viability of the industry, key issues such as environmental and agriculture issues need to be addressed. Experiencing extreme weather patterns also contribute towards a decline in production

"The limited land area we have for rubber and land acquisitions are causes for concern" says Poholiyadde, "in addition to tapper shortages, especially with the younger generation not wanting to get into this line of employment."

With these difficulties affecting the industry, Professor Nugawela requests a vision for the foreseeable future, "We have to manage with a vision to achieve a substantial growth in productivity and performance to challenge the inevitable increases in COP."

With production and price declines affecting the industry, public sector support becomes imperative. According to Poholiyadde a protectionist strategy is crucial "I would say it’s very vital, because over 60% of this industry production is by smallholders. So many people are dependent on rubber for survival."

Commenting on the way forward Poholiyadde says "We should ensure that value-addition factories continue to work uninterrupted. A lot of people have their hope in the rubber industry."

Sri Lanka’s rubber industry needs to attract foreign investment in order to expand and diversify, "We should promote more such industries to come in and set up manufacturing facilities here. I believe that is the way forward" he added.
http://www.island.lk/index.php?page_cat=article-details&page=article-details&code_title=101871
_________________
"Investing is easy to learn, but it takes a lifetime to master."