Message reputation : 100% (1 vote)
Lying is an art and a decent way to entertain crowds...

Gazette notice sent to me in 2016: Govt Printer

Acting government printer Gangani Kalpana Liyanage testifying before the Presidential Commission of inquiry investigating the bond issue said through a date in January 2015, was selected for the sale of bonds, she received the relevant gazette notice for printing only on November 18 last year..

Message reputation : 100% (1 vote)
Thanks YK for raising this important issue.

To be a successful politician, one should learn to lie on a grand scale. Gentlemen who never lie are not suitable for politics.

Lord Buddha once said that 'one who lies can commit any sin' including Anantharya Papa Karma.

I'll comment on the gazette in question when more details are publicly available for me to understand what really happened there. My gut feeling shows that some kind of drama is unfolding covering the real culprits in the bond case.

The whole picture of this issue also shows the plus points of Yahapalanaya concepts. ?Have we ever, heard of investigations against Government allied guys (while they are in power) in the past in Sri Lanka. ?Has any Government allowed this kind of "freedom" (eyes its not total freedom but it is better now than before) to the media in the past. ?Did we ever heard of a judiciary free of interference like today. The list is endless though we need more improvements for better.

Yk that film is very entertaining. Hv u watched it?

Not every one has mastered the art of lying 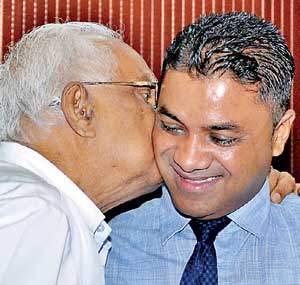 yellow knife wrote:SAITM CEO quits as Police alleges shooting might have been staged..

Not every one has mastered the art of lying

(Lanka-e-News - 01.March.2017, 8.35PM) The shooting incident in which Sameera Senaratne the CEO of SAITM was fired at on 6 th February was a spurious drama enacted to make a show he was facing death threats , police investigations have revealed

Sameera has told a close friend of his- UPFA ex member of Kaduwala municipal council (now dissolved) Lakmal alias Sudu aiya that he has need to make it known that he is facing death threats .It was Lakmal and his driver Susil who have orchestrated this shooting .

Sameera immediately following the shooting has discussed the incident via phone with Lakmal. Sameera has then attended a media briefing held on a subsequent day with Lakmal . In other words Sameera and Lakmal are bosom friends.

Though the police say two suspects have been arrested , these are suspects ‘created’ by Lakmal.

Sameera has made contradictory statements to the police from time to time. Sameera who initially said , he was inside the vehicle at the time the shooting took place , later said , he was not in the vehicle. The suspicions of the police had been triggered based on Sameera’s contradictions , and in the direction of Lakmal the UPFA ex MMC with whom Sameera discussed immediately following the shooting.

Lakmal who realized the police are suspecting him had planned to divert the investigation in a different direction by suppression of facts because ,if all the suspects who truly engaged in the shooting are apprehended , it was obvious Lakmal and Sameera too will be trapped Therefore he is getting ready to leave aside the actual culprits , and implicate others known to him – find a fall guy to foist charges. It is Lakmal’s driver Susil who is aiding and abetting the former in this maneuver.

Susil and Lakmal are residents of Welivita. ‘Tina’ is the nickname of a youth who came from Embilipitiya to settle down in Welivita . He is a youth who carried out the illicit contracts of bankrupt politicos of Mulleriyawa . He had been in remand custody umpteen times on charges of heroin addiction and having drugs in his custody.

Tina is the fall guy chosen by Lakmal and driver Susil to accept the blame in connection with this crime. He has been promised a sum of Rs. 500,000.00 as well as ‘visits’ (required meals etc.) to prison throughout his period in custody , in case .Lakmal has also promised to give him two firearms which were to be described as the weapons used for the firing , as well as a motor cycle . Susil was to say , that was the vehicle used in the shooting incident. Since nobody will give credence to the story that shooting was done alone , Lakmal has also promised Susil that he would get him another individual – an army SF member by the name of ‘Dilu’ who is now in remand custody over another crime , to act as his accomplice.

While driver Susil was having discussions with Tina, Lakmal had been planning a methodology to dupe the police, that is, Lakmal himself who has provided information to the police about Tina. However at the time police took Tina into custody , because Tina was having the pistol on his waist , and he declared at once , that was the pistol used to shoot Sameera , the suspicions of the police were aroused.

When the police took Tina into custody , the latter had handed over the two firearms supplied by Lakmal and his driver Susil to the police. A 9 m.m. Browning pistol , two bullets , and a 3.8 revolver and two bullets had been handed over. The motor cycle supposedly used in the incident has also been entrusted to the custody of the police. The latter had also apprehended the individual who was supposed to have given the motor cycle to Tina. However, that individual told police that he did not give a bike , and he was forced to say so by the ex UPFA MMC Lakmal and his driver Susil .

Tina who is addicted severely to heroin , and as he was ‘sick’ without heroin while in custody , he had divulged the true picture to the police . He had by a confession finally declared that all the lies were told by him at the behest of Lakmal ‘s driver.

Tina the fall guy and the owner of the bike were produced before the Kaduwela magistrate and remanded until the 3 rd of March.

Meanwhile ‘SF Dilu’ in remand custody who was to initially accept the blame for aiding and abetting Tina , has refused to assist. In a message sent by him to his parents , he had instructed his parents not to open the doors for Lakmal or his driver if they come to his home.

It is Lakmal who has weaved a story that relates how Tina the fall guy came to know SF Dilu. Tina originally stated , it is while he was in remand custody earlier on that he came to know SF Dilu through Banda , a friend of Tina. The issue is , since this Banda died in a shooting incident at Athurugiriya some time ago , the veracity of Tina’s statement cannot be confirmed. This story has been concocted by Lakmal as a face saving exercise.

Meanwhile the police had interrogated CEO Sameera of SAITM for a long period. Sameera who perceived that the truth is known to the police had stated, Lakmal was a close friend , and he discussed the threats posed to him (Sameera ) with Lakmal. However by evening when the statement was being recorded , Sameera has fastened the entire blame on Lakmal based on which Sameera was today allowed to go home after the statement was recorded.

Probably , after the arrest of Lakmal and the driver , the truth will surface regarding those actually involved.

Lanka e news inquired from an investigator who is a friend of LeN , at the time Sameera was shot at , and after noticing the damage to the vehicle. The investigator had a most intriguing story to relate …..

“According to these gunshot ,if this bloke who was inside had escaped , he cannot be a doctor. He must be a Batman”
Sameera suspended from post of CEO, SAITM

Dr. Neville Fernando the president of SAITM’s management, this evening (28) announced that Sameera Senaratne the CEO of SAITM private medical College has been temporarily suspended from service. SAITM took this measure in order to assist in the police investigations and to ensure transparency, Dr.Fernando added.

These days we hear the inquiry of Presidential Commission on Bond issue ...Yet it was a cleared issue almost a month ago by PM appointed ex Royalists...

The Prime Minister after having consulted the President over the phone decided to appoint a three member committee to investigate the matters concerning the above issue.
Accordingly Messrs.  Gamini Pitipana (Chairman) Mahesh Kalugampitiya and Chandimal Mendis were appointed to this Committee on the 9th February 2015 by Prime Minister Ranil Wickremesinghe.

The committee was instructed to look into the issue of Treasury Bonds and provide a report without delay.
The Government will take the necessary future action after observing the findings of this committee.