Chart that tells a story — Gold

Chart that tells a story — Gold 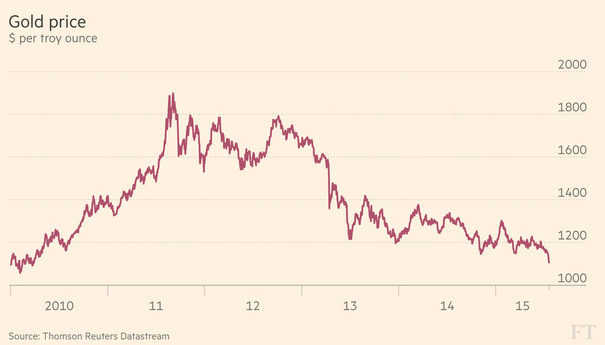 What does this show?
The price of gold hit a five-year low of $1,088 a troy ounce on 20 July, falling 4 per cent in just a few minutes after the Shanghai gold exchange opened. The immediate cause of the drop was a surprise five-tonne sell order placed on the exchange by traders overnight.

This triggered “stop-loss” orders, which traders put in place to limit their losses by automatically selling when the price reaches a predetermined level. This caused the price to drop even more sharply.

Why is gold out of favour?
One of the reasons behind the decline has been the stronger US dollar. The value of the greenback typically has an inverse relationship with gold. Like other commodities, it is priced in dollars on international markets, which means when the dollar rises investors have less buying power and the commodity becomes more expensive.

Another factor is the prospect of an interest rate rise in the US after the Federal Reserve said it may increase the base rate from 0.25 per cent sooner rather than later, and possibly this year. That diminishes the attraction of non-yielding assets, such as gold.

One other factor may have been Friday’s news from the People’s Bank of China that it owns around 1,658 tonnes of bullion — far less than the 3,500 tonnes analysts had expected. This news prompted a $10 per ounce price drop on Friday.

Adrian Lowcock, head of investing at Axa Wealth, said: “Gold has traditionally been seen as a hedge against inflation and a weaker US dollar. Neither inflation or the US dollar have been an issue, with the latter remaining strong and the former low.”

He adds that the Greek bailout negotiations and a 30 per cent fall in Chinese stock markets should have been cause for concern among investors, resulting in a flight to safe haven assets. However, investors have been quite relaxed about both events and have not sold off riskier assets such as equities and bonds.

Why has it been a hit with investors over the years?
The precious metal has traditionally been seen as a haven and hedge against inflation and a weaker dollar, but with the US economy showing signs of recovery and the dollar strengthening, its attractiveness has waned.

Since it provides neither a dividend nor an income, there is an opportunity cost in holding it. That may be worth paying in bad times, when interest rates are low and the price is likely to be rising. But, with borrowing costs set to rise, commodities are losing favour with investors, as higher returns can start to be generated elsewhere.

What are the prospects?
Over the long term the price could fall much lower. Analysts once predicted prices would surge to $5,000 an ounce, but many are now saying it could fall back through the $1,000 mark this year. Some think the inflation-adjusted price is even lower than $1,000, so it is not out of the question that prices could continue to fall.

Mr Lowcock added: “In the short term gold could be volatile as investors digest the recent swings. However as the US economy continues its recovery and looks to raise interest rates supporting the strong dollar we could continue to see pressure on the gold price.”
http://www.ft.com/
_________________
"Investing is easy to learn, but it takes a lifetime to master."

Thanks Sri for sharing.
Very interesting and enlightening too.
_________________
I am the wisest man alive, for I know one thing, and that is that I know nothing.
Socrates

Message reputation : 100% (1 vote)
Thanks Sriranga, for enlightening us. I never saw this aspect of gold. I'm not a gold lover but see most people follow a buy-and-hold strategy with gold, especially women with regard to jewellery.

Since the story came up, anyone here in to gold investing ? or know how to invest in gold ?

Where to buy and sell gold coins in sri lanka,

investing in gold can be boring, but if you are a fan, usually a women's game, it is advisable to buy from a reputed jeweler who can give you a purity certification which you better retain. Also note buying the biscuit with the hallmark is better than getting the jewelry as you save up to 30% on making cost and wastage.