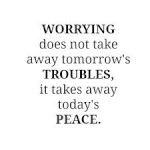 @sashimaal wrote:As we're in the middle of a bull run, there will be many stocks that will do better than CTC/NEST within this run. And if you're looking at short-medium term investment, there are better stocks (with risk) due to the current high PERs .

But if long/very long term investment horizen is considered, these stocks will be very good bets.

Following article will be of interest:

We Will see 2500 testing in time to come, I would not think it will fall below current levels.if we are looking for longterm entry this is the best time to BUY NEST......

Government constituents, the Sri Lanka Muslim Congress (SLMC) and the Jathika Hela Urumaya (JHU) may either vote against or abstain from voting for the Casino Bill, which is part of the Strategic Development Act, to be taken up for debates in Parliament on Thursday (25).

The JHU said the Party will take a final decision on the gazette tomorrow (24), while the General Secretary of the SLMC, Hassan Ali, when contacted by Ceylon Today said the Party had not taken a collective decision yet as to whether to abstain or vote against the three gazettes. "But our party, on principle, are against casinos and would probably abstain from voting for the bill" said Ali.


Speaking to Ceylon Today, JHU Western Provincial Councillor Nishantha Sri Warnasinghe said that since the amended Gazette notifications did not include provisions for casinos, the JHU would support the Strategic Development Act in Parliament and would also participate in the debate.
"We, as the JHU, have made our stance clear that we are against casinos. We are against the establishment of new casinos and believe that existing casinos should be regulated by the government. However the Strategic Development Act and the three relevant Gazette notifications which have been amended and are due to be resubmitted before Parliament does not have provisions for casinos. So the JHU does not have an issue and we will support the Strategic Development Act, including the three amended Gazette notifications" Warnasinghe told Ceylon Today.


Among the three Gazette notifications, due to be taken up for debate in Parliament, the hotel project by Australian tycoon James Packer's Crown Casino is also included.
The Janatha Vimukthi Peramuna (JVP) however has said that it would vote against the Strategic Development Act in Parliament while urging other parties to follow suit.

If we start Casinos in Sri Lanka targeting foreingers I believe we will attract much of tourists. Singapore Senthosa Island, Genting Highland of Malaysia are favourite places among casino players and many chinese goto Maccau Islands for casinos...

@yellow knife wrote:If we start Casinos in Sri Lanka targeting foreingers I believe we will attract much of tourists. Singapore Senthosa Island, Genting Highland of Malaysia are favourite places among casino players and many chinese goto Maccau Islands for casinos...

I still feel better for some correction

@yellow knife wrote:If we start Casinos in Sri Lanka targeting foreingers I believe we will attract much of tourists. Singapore Senthosa Island, Genting Highland of Malaysia are favourite places among casino players and many chinese goto Maccau Islands for casinos...

Those places there's another big attraction.Wonder government will consider that too.

yes that's why they are called strategic mixed developments by the government. 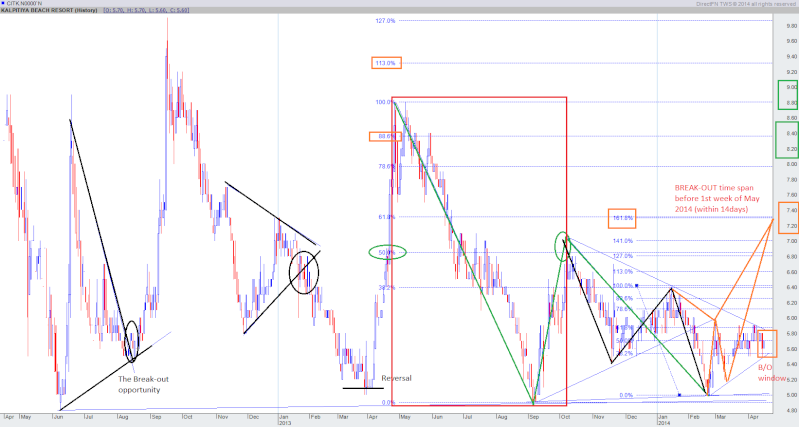 What do you think about ACL chart.

The current market price is well trading below 150 moving average. Support of Rs 60 holding thinly and very much seeing more bearish biase to close around Rs 40/- technically to complete descending triangle. The upside RES is Rs 70/- perhaps some limited upside would be evident but in my opinion, the selling will continue towards 40-45Rs. 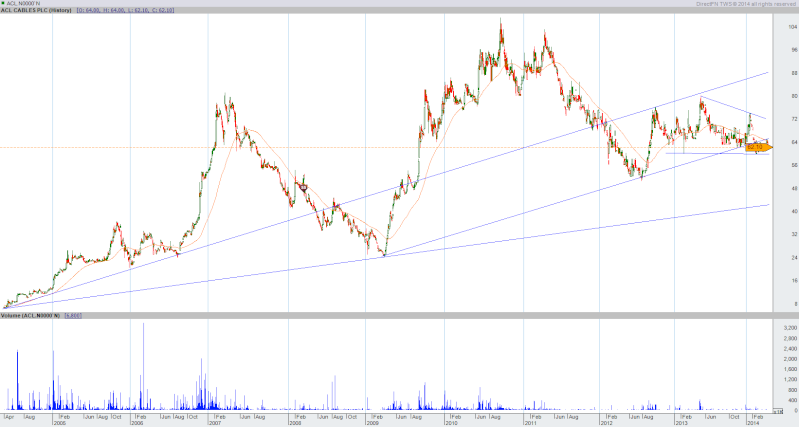 Copper futures rose to a six-week high as stockpiles monitored by global exchanges declined to the lowest since 2009 and the outlook for demand improved in the U.S., the world's second-largest user of the metal.

Inventories tracked by exchanges in Shanghai, London and New York have dropped 23% this year. Broker Comm Trade USA Inc. said a dwindling supply of scrap copper has narrowed the discount to new metal to the tightest in two years. Orders for durable goods in the U.S. climbed last month by the most since November, government data showed today.

Scrap copper No. 1 has traded at a discount of as little as 8 cents a pound below the price of new metal, Bryan Rosenstrauch, president of Comm Trade USA in Houston, said in a telephone interview. The discount was about 10 cents a year earlier, he said.

The refined-copper market had a deficit of 53,000 tons in January. 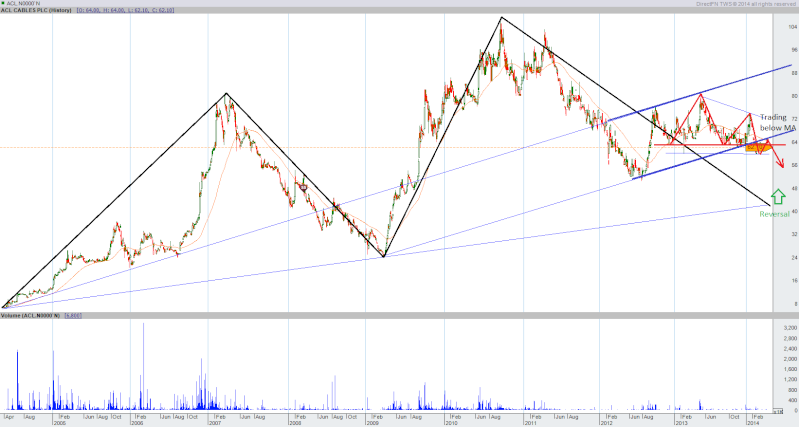 Hope this chart gives some insight into the way I am looking at ACL.

TAH wrote:Can the CITK break the tight contraction before 14th May time frame

CITK - I am looking at it differently the reversal can occur 5.8-5.9 levels B/O confirmation would trading above 6Rs.
Failure would be CITK coming to 5.20.

There is something different on ACL & CITK, may be you did not notice the Price Actions.
As indicated in CITK charts its worth to risk .70c or .40c for a higher gain.

Risk is if it stops around Rs 5.50 - where the demand will be much less.

CITK will eventually see though 6+ 7.50 would be great sell off points

I am holding a POST on a Chart I worked during the week-end.
Which I will put through middle of next week.

The counter may give 25% return on capital gains or more within 1 year presumably.

CTC?
It should give more than that (disclaimer:holding)

Shashimal, Any reason for you to think CTC will give more than 25%, this year?